Where can I watch the Queen’s Platinum Jubilee?

What’s on over the Jubilee weekend and where can you watch it? PLUS giveaways and prizes up for grabs! 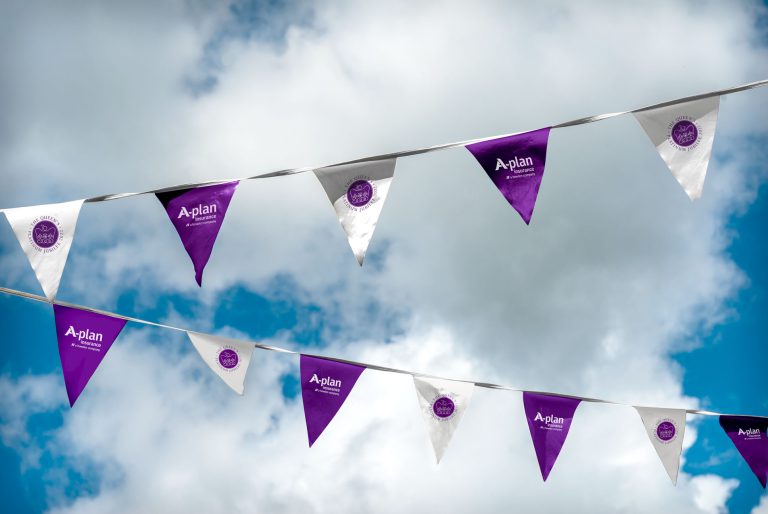 On the 6th February, Her Majesty The Queen marked 70 years of service to the United Kingdom, the Realms and Commonwealth.

To make better use of the weather, the uniquely British Queen’s Jubilee celebrations are to be held over a 4-day Bank Holiday weekend in June. Whether it’s a couple of extra days off work, a community street party or quietly contemplating the Queen’s history, there is something everyone can do, or watch, to feel part of events.

PLUS, we have several Jubilee prizes up for grabs. Read on to find out how to enter.

Many neighborhoods are planning a community street party. If you are organising one, and haven’t yet lined up your insurance, take a look at our blog ‘Insuring your Jubilee Street Party’.

This guide will also tell you about the types of Jubilee Street Party you can hold, from a road closure, to a ‘Street Meet’ and a ‘Neighbour’s Picnic’. If you aren’t sure whether you need insurance, for peace of mind, just give your local branch a call and they will be happy to answer any questions you may have.

What’s on over the Jubilee Weekend?

Can I watch the Queen’s Jubilee on TV?

The Queen’s Birthday Parade, aka ‘Trooping the Colour’, will be broadcast live on BBC One from 11am on Thursday 2nd June.

For those closer to London who would like to attend in person, the ceremony can be watched by the public along The Mall or the edge of St James’s Park, with large screens set up to ensure everyone gets a reasonable view.

The ceremony, featuring more than 1,400 soldiers, 200 horses, and 400 musicians, will begin at Buckingham Palace.

It will then proceed down The Mall, with the Royal Family on horseback and in carriages, to Horse Guard’s Parade. And of course, we’ll all be waiting for that ubiquitous balcony photograph.

On Saturday 4th June, Platinum Party at the Palace will air on BBC One. The evening of music and entertainment will also be attended by 22,000 people.

Ten facts about The Queen:

For full resources, see the official Platinum Jubilee website. The Royal Family also have their own website, and you can find out more about the formalities here. Additional stats sourced from Time.com.

With over 100 branches at the heart of many towns and cities across the UK, A-Plan is giving away Queen’s Jubilee goodies to help you set up your street or home party, and keep the children entertained.

Pop into your local participating branch to pick up your Jubilee pack from Wednesday 25th May! Each pack contains stickers, colouring-in kit, including a colour-your-own crown, and cake toppers (while stocks last).

Win an Afternoon Tea for Two

Don’t forget to scan the QR code on the in-branch poster to be in with a chance of winning a very British Afternoon Tea for two!

Alternatively, you can enter the competition online here.

Do you have Jubilee Street Party insurance?

If you are organising your own community gathering, you find out more about Jubilee Street Party insurance here. And if you aren’t sure whether you need insurance or not, just give your local branch a call and they will be happy to advise you.

Tool theft at crisis point – write to your MP