The Long Way Round for the Spirit of 63!

When it comes to insuring motorbikes and scooters, most people who own one would prefer to talk to someone who shares their passion. One of our clients did just that, insuring the ‘Spirit of 63’ and its colourful past, with A-Plan’s specialist motorcycle unit, Allstyles! 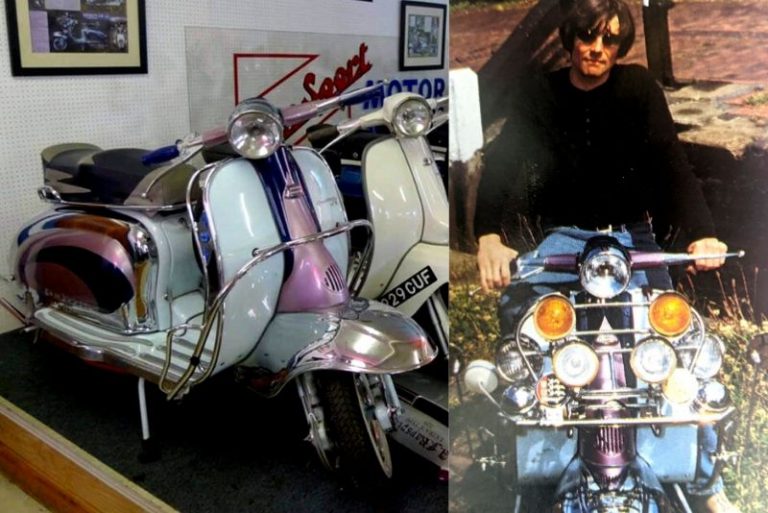 We talk to Jim Crutchley, the latest owner of the celebrity ‘Spirit of 63’ Lambretta! Jim is also the manager of ex-Deep Purple’s Glenn Hughes, and has recently collaborated with Tony Iommi from Black Sabbath and Xerjoff on The Scent of Dark perfume launch and video. This is his adventure.

A scooter’s journey from BritPop to Australia

Fun fact: ‘Spirit’ features heavily in the Ocean Colour Scene 1996 video ‘The Circle’, and was subsequently bought by band member Steve Cradock! It is believed to have played a pinnacle part in the 90’s BritPop era and inspired many more mods on many more scooters.

“In 1998, my brother and I were heavily into the BritPop scene.” remembers Jim. “My father took us to Gran Sport, a Lambretta and Vespa scooter shop in Birmingham – and that’s where I first spotted ‘Spirit’ at the back of the showroom (Dez Askill, the shop owner, pictured on Spirit above, created ‘Spirit of ‘63’ – before then, scooters were being restored to factory colours and specs).

“My brother recognized it as the one owned by Steve Cradock of Ocean Colour Scene, but was only 13 at that time, so being able to buy it wasn’t an option – I had to stick with my posters, photos and literature about it for a while longer.

“Seventeen years later, after establishing myself in the music industry, my search began in earnest. Spirit didn’t seem to appear in scooter circles, or on eBay, but eventually it did appear! In Australia.

“Its British owner had emigrated to Australia, taking Spirit with him, but then moved to the USA for work, keeping Spirit in the back of a shipping container in Perth.

“An eagle-eyed Brit, Paul Gixey, spotted Spirit in the container looking worse for wear, cleaned her up and brought her back to her former glory. I followed the story on Facebook and messaged Paul to congratulate him on the great job he had done, which really ignited a fire in me. We developed a friendship, I offered to buy it and finally, he brought Spirit back to the UK!

“Typically, I was on tour in Mexico, then Sweden, when it returned to the UK, but I thought, ‘I’ve waited 17 years, I can wait a little longer’! Finally seeing it for the first time was a fantastic feeling – it took me back to being in Gran Sport as a 13-year-old with my brother and father. As the scooter was beautifully restored by Dez in 1993, and has seen very few miles since, it is running very well.”

The Spirit of ’63 has its place with the British Lambretta Archive.

Built in 1959, the Series 2 TV175 model is a ‘Ridgeback’ example, which features a ridge on the frame tube, built by Innocenti in Milan. The production of this particular model ceased in November 1961.

It’s hard to believe that ‘Spirit’ is now over 60 years old – with so many used in sporting events, there are few left that haven’t been involved in a crash or collision!

Not only it is accessorised with an original Covolo seat and Ulma double leg shield trim it also includes 4 mint condition Raydyot lights, original badge bar and twin exhaust, making it truly unique.

Spirit was also quite the supermodel, gracing the cover of national scooter magazine ‘Scootering’ a number of times!

In its 60+ years, this Lambretta has certainly enjoyed a full life and shows no signs of retirement thanks to its new owner – and the Allstyles team who are proud to play a small part in its big history!

Jim came across Gary’s details via a Facebook poll, titled ‘Who is the best to insure scooters?’ and Allstyles, part of A-Plan Insurance, was top of the poll!  Gary Youngs and his Allstyles team are scooterists themselves, with a cool collection of Lambrettas, Vespas and a Triumph complete with ape hangers, to mention a few.

“Gary has been great from start to finish,” confirms Jim. “I’m very happy with the cover and will continue to use Allstyles for years to come!”

If you have a motorbike or scooter, whether standard, vintage or customised, and value speaking to fellow enthusiasts, it could be worth a quick call with Allstyles. You can contact the specialist team directly on 01206 821330.

The value of the celebrity marriage proposal

Phishing vs Spamming: know your cybercrime