Since 2012, the A-Plan Thatcham Schemes office have been proudly supporting Volkswagen themed shows and events from the humble family show T-Fest to Europe’s biggest van show Busfest. Our adventures started when we joined the … 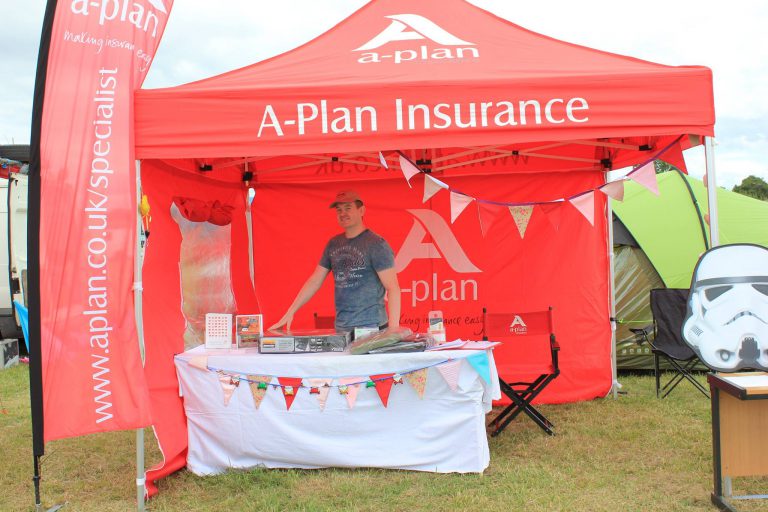 Our adventures started when we joined the Volkswagen T4/T5 forum as a sponsor and we noticed the owners of the club held a small show called T-Fest at Beaulieu.

Out of all the big name insurers on the forum, A-Plan were the only broker to offer to support the event.

From day one the goal was never to just turn up, and hand out leaflets but to be part of the scene.

From joining in the shows’ various themes, to getting soaked in the shows’ annual water fight and then sitting around a camp fire in the evening with fellow traders and friends, we really embraced the true spirit of the Volkswagen community.

Over the next few years, we continued to support as many shows as we could and this is again made A-Plan stand out from the crowd. Our competitors were supporting the big shows with the highest attendance levels, where we were also supporting the smaller shows. 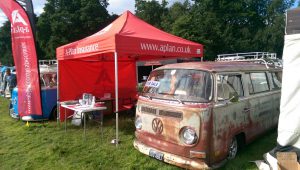 This turned out to be key to our success as the show runners appreciated our support and recommended us across social media and praised our light hearted non aggressive view to trading.

People at the shows knew they could pop over to our stand for a knowledgeable friendly chat about insuring modified vans and campers.

Across social media our name grew and this drew the attention of our competitors. They started to copy a number of ideas I had like having fresh water bowls out for owners with dogs. The dogs would stop for a drink and we could have a chat with the owners.

It was Vanwest 2017, which gave me the idea to try something different. I know the guys who run the show really well and they had a movie fancy dress theme for the show.

I did a Star Trek display to match the theme and people attending the shows loved it. I had planets made and dangled them from the gazebo, a space style back drop, I was dressed in a full Captain Kirk costume and had a large life-size cardboard cut-out of Mr Spock. 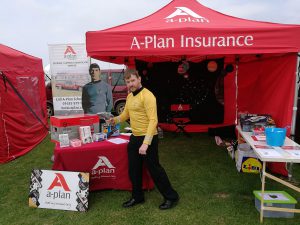 The show runners praised our efforts and the people attending the show had fun posing for photos with the life-size Mr Spock (who was very cleverly stood next to a banner with the A-Plan name and contact number).

For me the shows and events have very much been a learning curve and how I can make us stand out and connect with people. 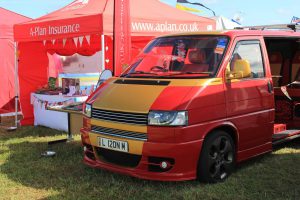 A lot of people come over to our stand just to meet the team and thank us for our friendly nature and supporting the scene.

A-Plan are now very well thought of in the VW scene and supporting over 14 shows a year, including the main official sponsor for Busfest which is the granddaddy of them all.

Our success has come from being able to think outside the box and play to each shows strength. This has also led to a number of traders wanting to do business with A-Plan.

As the scene continues to grow and develop, we match the passion and enthusiasm that people have for Volkswagen.

In 2018, these are the shows that A-Plan will be sponsoring:

A-Plan will also be proudly sponsoring the charity event Run the Ring once again.  Last year, we sponsored a 600 Volkswagen van and camper convoy for a lap around the M25 motorway.

Not only did A-Plan print all the stickers for the event, but joined in the convoy. £25,000 was raised for Scotty’s Little Soldiers.

What Travel Insurance Cover do I Need?