Fly-tipping – How to tackle the risk

Fly tipping is on the increase in England and for farmers and landowners it is a significant issue which cannot be ignored. The Department for the Environment, Food and Rural Affairs (Defra) reports that there … 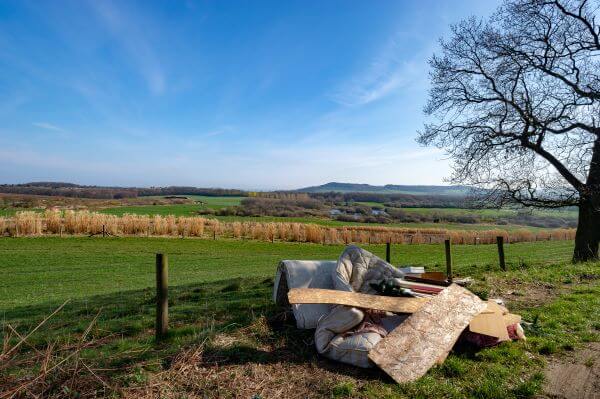 Fly tipping is on the increase in England and for farmers and landowners it is a significant issue which cannot be ignored.

The Department for the Environment, Food and Rural Affairs (Defra) reports that there were 1.1m fly-tipping incidents in 2020-21, an increase of 16% on the previous year.  [1]

The most common place for fly-tipping was on highways, accounting for 43% of incidents. But footpaths and bridleways were second on the list and 18% was on private land – up 2% year on year.

It is not only household waste being tipped. There were 61,000 incidents involving commercial waste, which can often be more complicated and more dangerous to remove.  Incidents also included animal carcasses, clinical waste, asbestos, chemical drums, oil and fuel.

What are the costs of fly-tipping?

Farmer victims of fly-tipping often have to pay to clear up other people’s mess and cope with the operational fallout if it occurs on their own land.

In fact, a national survey by the Environment Agency revealed that dumped waste becoming a “visual blight or eyesore” disproportionately affected farmers, with 90% of respondents reporting having been affected.

In addition, 55% of respondents said that fly-tipping had worsened over the previous 12 months, when Covid lockdowns and tip closures led to an increase in incident.

How can insurance help protect against fly-tipping?

Fly-tipping should always be discussed with your broker before taking out a policy.

Some farm policies offer a small amount of cover – typically a few thousand pounds – as standard without any additional charge. But clearance costs can be much higher, especially for serious waste dumping offences.

More comprehensive farm and estate insurance policies are available to include up to £25,000 protection for fly-tipping as standard. This covers the cost of clearing up and removing any materials resulting from a waste dumping incident out of your control, including pollution, contamination, and environmental damage.

How to make a claim against fly-tipping

The first task is to find out who is responsible for the clear-up operation, which could depend on where the fly-tipping occurred.

For small-scale fly-tipping on public land, including public highways where the rubbish might block a road or your farm entrance, local authorities are responsible for investigating, clearing the waste, and taking appropriate enforcement action.

For larger-scale offences (more than a lorry load), hazardous waste or fly-tipping by organised gangs, in England the Environment Agency (EA) is responsible.

When are farmers personally responsible?

If fly-tipping occurs on private land, that’s when to make an insurance claim if you have the correct cover in place. But still report any incidents to the local authority and police, who may want to investigate.

How to protect your farm from fly-tipping

Prevention is the key when it comes to fly tipping. Key tips include:

● Stay in touch with local police, especially if they have a rural team

Penalties for fly tipping include fines under the Environmental Protection Act, fixed penalty notices and vehicle seizure. Householders can also be fined up to £400 if they pass waste to an unlicensed waste carrier, which is then tipped.

Defra says there were 1313 fines issued by courts in 2020-21, in addition to 57,600 fixed penalty notices, with four custodial sentences and 15 community service orders also handed down.

The next set of fly-tipping figures from Defra will be released in December 2022, and it will be interesting to see if the end of Covid restrictions have led to a reduction in incidents.

In the meantime, farmers should do everything possible to prevent an incident happening on their own land and ensure they have the right insurance in place.

Building on a Farm – What to Consider