The team at our A-Plan Modified Vans office are incredibly excited to see the return of the Volkswagen themed shows in 2021. 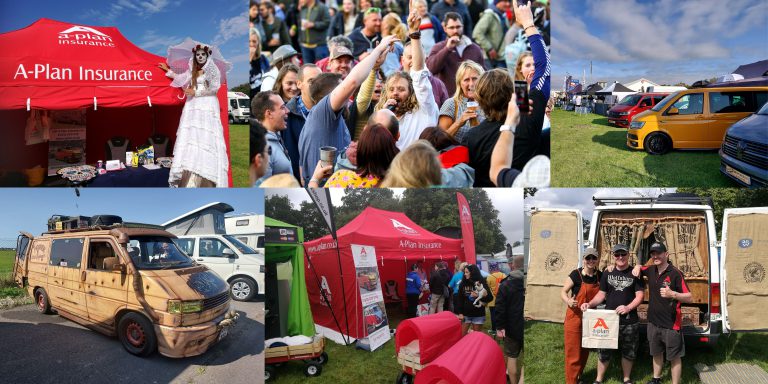 The team at our A-Plan Modified Vans office are incredibly excited to see the  return of the Volkswagen themed shows in 2021. Our events and festivals regular Dan Cameron who works in our Modified Vans team comments “I’ve personally really missed not being at the shows over the past year and I can’t wait to see and catch up with some familiar faces. Whilst the event schedule isn’t as packed as it normally would be, I’m just glad things are starting to return to some degree of normality.”  .

Here’s a list of some of the events taking place this year.

Starting off in style, we are once again supporting Camperjam – the 2nd biggest campervan enthusiast event which is taking place from the 2-4 July 2021

The show has already sold out and it promises some amazing entertainment, including a classic Rock night on the Friday and a variety of tribute bands throughout the weekend. Plus, there’s over 100 stalls to visit and plenty of things for the kids too – from Fiery Jack’s Games Emporium and Panic Family Circus, the whole family are set for a weekend of fun.

We’ll be there too, sponsoring the shows Fancy Dress competition with this year’s theme of “wannabe”. When you were a kid, what was your dream growing up.. A doctor, a fireman, Knightrider.. So many possibilities. Don’t forget to come and say hi – we’re planning a photo booth on our stand for people to have their photo taken.

Next up is Bristol Volksfest on the 05th of August.

We’re very proud to be the main sponsor for Bristol Volksfest (BVF).

Like many other events last year, the BVF was cancelled due to covid and the previous year was the now famous Bristol Mudfest with heavy rain leading up to the show and the weekend was forecast for sunshine. The field became a mud pit with vehicles having to be towed onto pitches and the show pretty much collapsed. So we’re hopeful for bright skys on the 5-8th of August! With DJ’s, entertainers, workshops, a dogs show, VW demos and displays, it’s a packed weekend with lots to see and do.

VW Action at Santapod – 05 of September.

It will be our first time at the VW Action event – which is the longest running weekend VW Show in the world – now in its 45th year!. So we’re excited to see what it’s all about. As you will no doubt have guessed, we’ll be there with our stand, but we’re also sponsoring the event. With an 80’s theme party, they’ll have a host of 80’s music – so if you’re going, be sure to have your leg warmers, bold prints, and eyeliner at the ready.

The show that needs no introduction is the mighty Busfest held at the three counties showground in Malvern. We’re pleased to be the main sponsor of the show and look forward to being there again – it’s certainly a busy weekend for us, but if you’re heading to the Three Counties Showground there’s plenty to look forward to as well. Boasting the UK’s largest trade pitch in the UK, you’ll be able to check out a whole host of VW related stands as well as the Pamper Zone, Fun Zone and the six music zones.  Busfest has been the most popular show on the calendar welcoming over 25,000 visitors over the weekend.

After the busy Busfest weekend it’s always good for a change in pace.  We are the main sponsor for Vdubs in the Valley held on the 17th of September. This event is a  small family run show in Shropshire that packs a mighty punch. Back in 2019, it was one of the shows that really stood out for our A-Plan Modified Van’s team  – Dan comments “It offers a A friendly atmosphere with great entertainment as well as a fun charity auction . And with this year’s theme of James Bond (Friday) and Cowboy’s and Indians (Saturday) we’re looking forward to seeing everyone’s outfits. And not forgetting the Show and Shine on the Sunday to check out those VW’s, scooters, classic cars and movie cars.”

Finally, is a rather busy weekend, with not one but two events.

First of all we head up to Chillington Hall for Party in the Park 3, run by the Dubs Collective team on the 24th of September.

We will be setting up our trade stand and working with the team until Saturday afternoon and then heading home for an early start Sunday morning.

26th of September is the most original, fun and unusual event in the VW calendar – Run the Ring 5.

Run the Ring is a charity convoy around the M25 motorway and A-Plan have proudly sponsored the event since Run the Ring 2, and not only print all the stickers for them but also join in the convoy.

Last year, our very own Dan did a live interview on Vdub radio while driving the ring (on hands free of course ) and people enjoyed listing to our partnership with the team.

The chosen charity for Run the Ring 5 is Coppafeel.

The ringers have been one of our top groups and we get amazing support from the team and people running the ring.

Next year we hope to see the other shows we sponsor bounce back, including Vanwest, Dubtoberfest, VW Jamboree, Wurzledubz, West’est Fest, Dubs in Wonderland, Veedub Family birthday weekender.

What does park home insurance cover?